I bought myself a couple of LEGO sets as birthday presents to myself, and this is the first, albeit smallest of the two.

Opening all the bags, it was only afterwards I realised there was a QR code on one of them, unfortunately I tore through it opening the bag so couldn’t scan it to see where it led to. Possibly an online instruction booklet?

Box reads for ages 10+, I’m fairly sure I was building 12+ models when I was still 7. Seriously, who pays any attention to those guide figures? Kids figure it out, at least I always used to. That’s part of the fun!

Took a bit to get going, I’ve not built any LEGO since my Ghostbusters ECTO-1 set two years ago. Blimey! So probably about a 20 minute build, nothing complicated except for the stacking of the blue and white tiles (I presume they represent papers or books or disks?) as they are supposed to be haphazard. It’s not easy to deliberately put something into place haphazardly!

Similar design for the base, and then the shuttle and booster modules. Slightly more complicated to build than the first one, but I’d found my fingers and thumbs were cooperating with me by now.

It’s at this point all the nostalgia of building LEGO sets as a kid kicks in. The build of the shuttle especially, the space theme was always one of my first choices in any set, the Ice World range being a particular favourite back in the day. Those sets were great, with Ice Commander Bear and his team expiring an alien world of ice and snow, in ships that had skies, launching satellites from land and air. The sets were identifiable by blue and white builds with neon orange canopies, visors, antennae, and their little ice saws. Anyway, I digress down memory lane. Back to the build!

Again, nothing dramatically complicated, just a fiddle to line up the boosters on the fuel module. Nose cone of the shuttle feels a little delicate, pops off quite easily. A future redesign may benefit from a bar on top of the cockpit area to sturdy it.

Easy, and I’m finally in full build mode by now. I can remember where everything goes, it almost comes to the point where you don’t need to really look at the instructions anymore, just a mere glance and you know which bricks to reach for next, and where to place them. I used to pride myself at being a fast builder as a kid, usually on the afternoon of my birthday or Christmas which was when I got most of my LEGO, or a school holiday when I spent whatever pocket money I’d saved up over the previous weeks.

There is something rather endearing to the old “sometimes we have to bodge it and fix it” attitude of early space exploration when you realise that the main body of the Hubble space telescope is made of a LEGO City dustbin piece. It kinda says it all, really, and reminds you that the crew of Apollo 13 were saved from CO2 poisoning by the use of gaffer tape and astronaut socks to jerry-rig two different types of CO2 scrubbers.

So that’s it. This quite a nice, easy build to get me back into the swing of things. I had originally planned to do this one after completing the massive build that will be VOLTRON, but then I thought better of it. That’s a mahoosive build, with five separate components that come together to make the final mecha, which is going to take some building.

For reference, my TARDIS set took about two hours in Christmas afternoon to build, while the Ghostbusters ECTO-1 set took two evenings after work. VOLTRON is going to be about four or five hours, I’d guess. Watch this space for a build review on that one coming soon.

My FantasyCon this year obviously included one of the most important (for me, anyway) key ingredients:

Plenty of beer was drunk throughout the weekend. I usually try to arrive on the Thursday before the convention, and so this year, as BFS Secretary, I volunteered to host a pub meetup social evening for any early bird attendees. We descended on the local Deva Tap Brewery’s bar in the old railway station office, and I was joined by several writers and editors for a few beers. That particular brew was called Simcoe, a nice bitter sweet real ale that went down rather well.

Following that, we returned to the hotel bar and I made the foolish decision of trying to match a certain Rogue Irishman on shorts of brandy and rum. Let’s just say Friday morning I was feeling rather delicate…

This did give rise to one of my favourite little moments of the weekend. Listening to the Rogue Irishman regale the nearest sets of ears about obscure conventions nobody’s ever heard of, Ian Whates of NewCon Press turned to me, and we mouthed to each other in perfect unison: “What is he on about? I have no idea!” and then fell about laughing. I am however, now fully briefed on the minutiae of AsiaCon and the Chinese bid for WorldCon. Who knew?

Friday morning was a blur of hangover and a sore neck from pillows that felt like concrete (thanks Kat for letting me borrow a nice feather-filled one from her slightly more upmarket room!). By teatime I had bought many books, and attended the PS Publishing launch to procure Thana Niveau’s new collection Octoberland and get it signed by her and Alison Littlewood, who wrote the introduction. Then it was off to a meeting of the BFS Committee where we discussed the last year and our upcoming plans, followed by a quick stop for food before the evening entertainment of the FantasyCon Disco. Highlight of that was managing to get Mark West and Phil Sloman copying some very dodgy dance moves to a Jackson 5 hit that I probably made up on the spot.

My birthday. Or as I geekily like to call it, levelling up another cycle of XP. I’m now on level 38, if you must know. And no, I know I don’t look a day over 30, thank you, you’re too kind.

I was publicly ousted as the birthday boy in the breakfast restaurant when chief RedCloak Marguerite Kenner made an announcement to the room, and led a rousing chorus of “Happy Birthday”. I may have tried to hide beneath my hoodie. Later in the day, I was gifted with a lovely little birthday cake (which was really delicious!) from Steve Harris and CM Franklyn.

This was followed with buying more books, some of which were also signed. Obligatory con book haul picture: 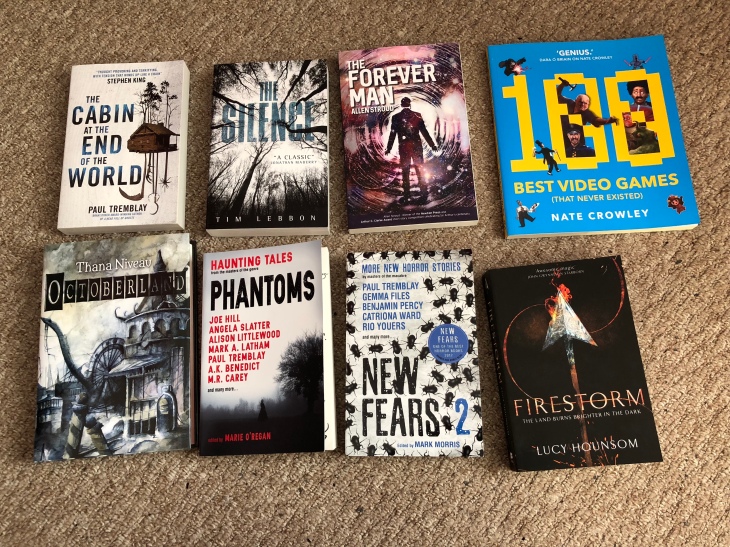 I managed not to spend a small fortune on books this year, I’m very proud of myself.

Once in the bar (escaping the karaoke) I managed not to buy very many drinks, care of people offering me “one for the birthday”. One turned into many, and I eventually went to bed tired and happy.

This was the day I had been nervous about for the last few weeks, drawing ever nearer. Partly because of the BFS AGM (prior knowledge to a major announcement led to nervousness over the potential ramifications of such) and then a certain item on the scheduling with my name against it, entitled “FantasyCon2019”. Gulp.

For those who haven’t heard the news on the grapevine, incumbent BFS Chair Phil Lunt had announced to the rest of the Executive Committee (Lee, James and myself) the other week that he would not be standing as Chair again this AGM. We needn’t have been overly worried, however, as PR Officer Helen Armfield decided she would stand as the new Chair, stood unopposed and was voted in.

Next up: The Announcement. FantasyCon2019. Many had heard rumours and mutterings (Chief RedCloak Alasdair Stuart made me laugh when he told me about overhearing a group discussing the possible venues at breakfast that morning, and was highly amused when he and Marguerite walked in wearing their red hi-viz vests and the group promptly stopped talking about it) but we officially confirmed it: start practicing your highland fling, we’re going to Scotland! The Golden Jubilee Conference Centre in Glasgow, to be precise, on 18th-20th October 2019. That’s two birthdays I’ll be celebrating whilst at FantasyCon. Hmmm.

So far, all the feedback I’ve received after this announcement has been really positive. Steve J Shaw of Black Shuck Books cornered me in the Dealers Room afterward, jokingly berating me for “not caring about those of us who live south of the river” but then congratulating me on being brave enough to be the first to take FantasyCon out of England in a very, very long time.

I’ll blog separately about FantasyCon2019 in another post, but suffice to say I am very excited by the response I’ve received so far to the news.

The weekend was rounded off with the British Fantasy Awards Banquet and Ceremony, the BFAs ably administrated by Katherine Fowler for the second year running, and the ceremony put together and hosted expertly by Lee Harris. I even got to stand up and do a quick minute announcement on FantasyCon2019 again, which garnered even more support. Of all those coming up to me after the ceremony, I was really glad Claire North (aka Cat Webb) and I managed to have a brief chat. Always lovely to meet her, she is a truly amazing, funny and fiercely intelligent person with great writing skill.

After the first official meeting of the FantasyCon2019 committee and leaders in a local pub over dinner, we retired to the bar for the rest of the evening. The last thing I remember before bed was Rob Shearman sharing his love of various incarnations of the Doctor with myself and the Dutchies. Great conversation all round.

And that was FantasyCon2018. Busy, tiring, exciting, slightly expensive, but thoroughly enjoyable. I saw so many old friends, made several new ones, and unfortunately missed so many other people who were there but I didn’t get chance to say hello to.

My biggest love of course goes to all the RedCloaks and organisers of such an amazing weekend. The bar has truly been set high.